A blog by Bob Palin in General

A self indulgent occasional outpouring of my memories of and thoughts about motorcycles and my life.

Probably the best known Torrey Tale, it followed a very cold ride the week before over Boulder Mountain


After the rather cold ending of the ride the week before I decided to head out into the desert where it would definitely be warmer. And it was.

One of my favourite loops is to go down through Capitol Reef NP and take the Caineville Wash out to Cathedral Valley then climb up Thousand Lake Mountain and go over the top to UT 72 and home. At this time of year the mountain is buried under several feet of snow but I knew there was a dirt road from Cathedral Valley north to I70 and that it didn't get too high so that was my plan. That is in fact exactly what I did, but it didn't go exactly how I expected it to

The wash meets the road just south of Capitol Reef National Park and this time it actually had water in it, that should have been a warning to me... 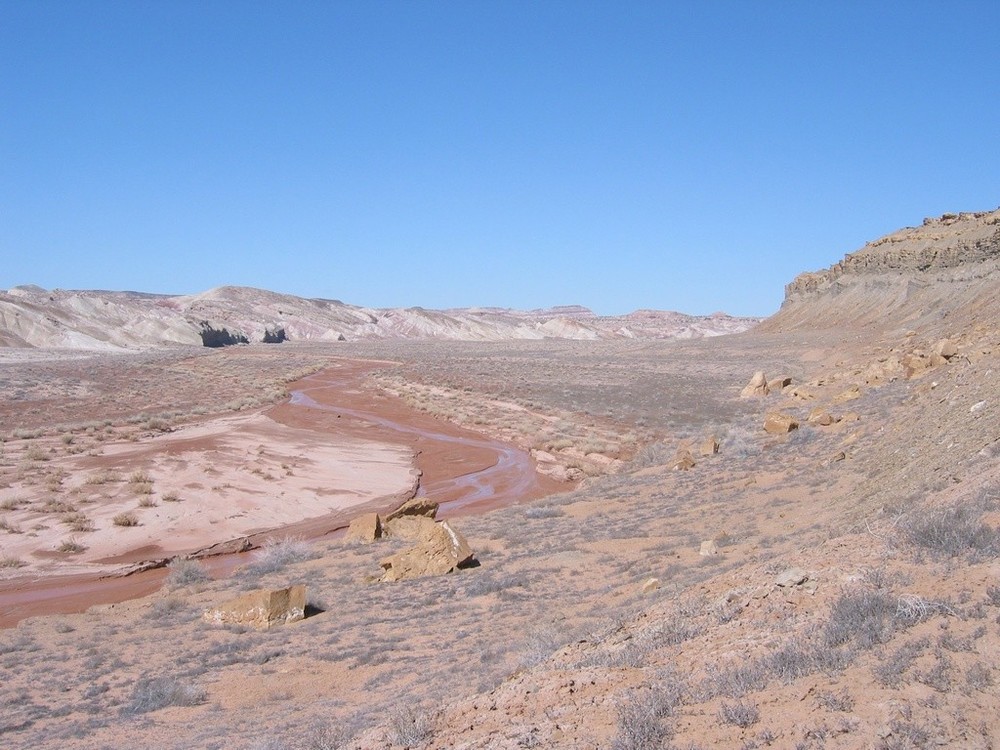 Caineville Wash is desert with sparse vegetation but Thousand Lake Mountain is visible to the over the hills to the west to provide picturesque scenery. 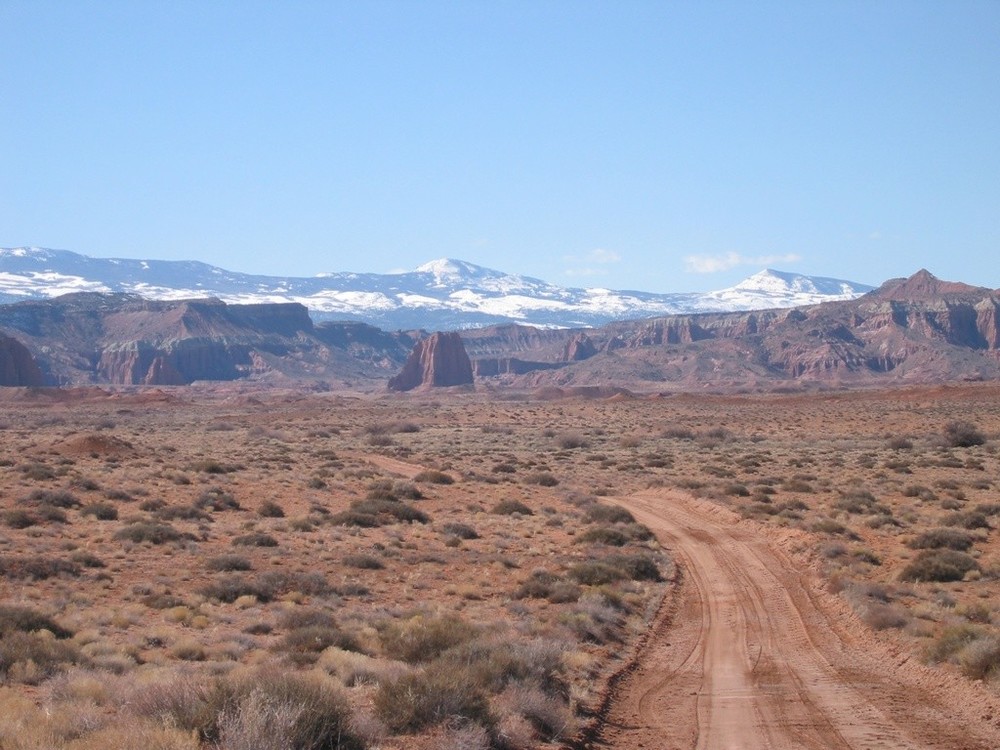 Entering Cathedral Valley from the Middle Desert, the large monument in the centre is the Temple of the Sun. 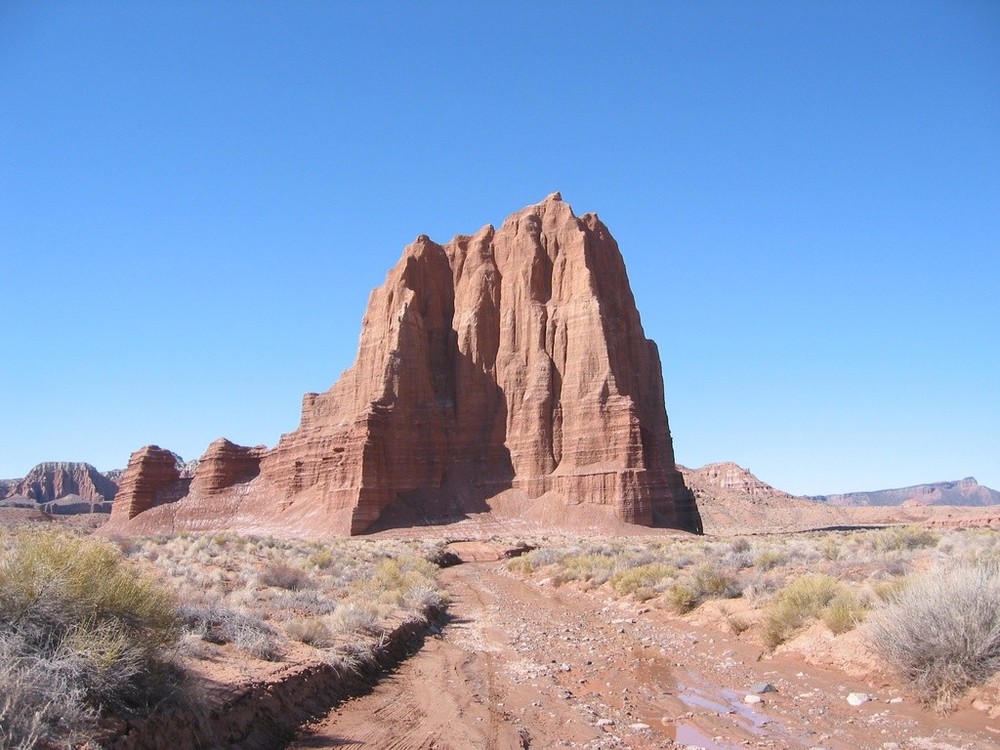 The road followed a shallow wash up to the monument, in the summer it is deep, soft sand. 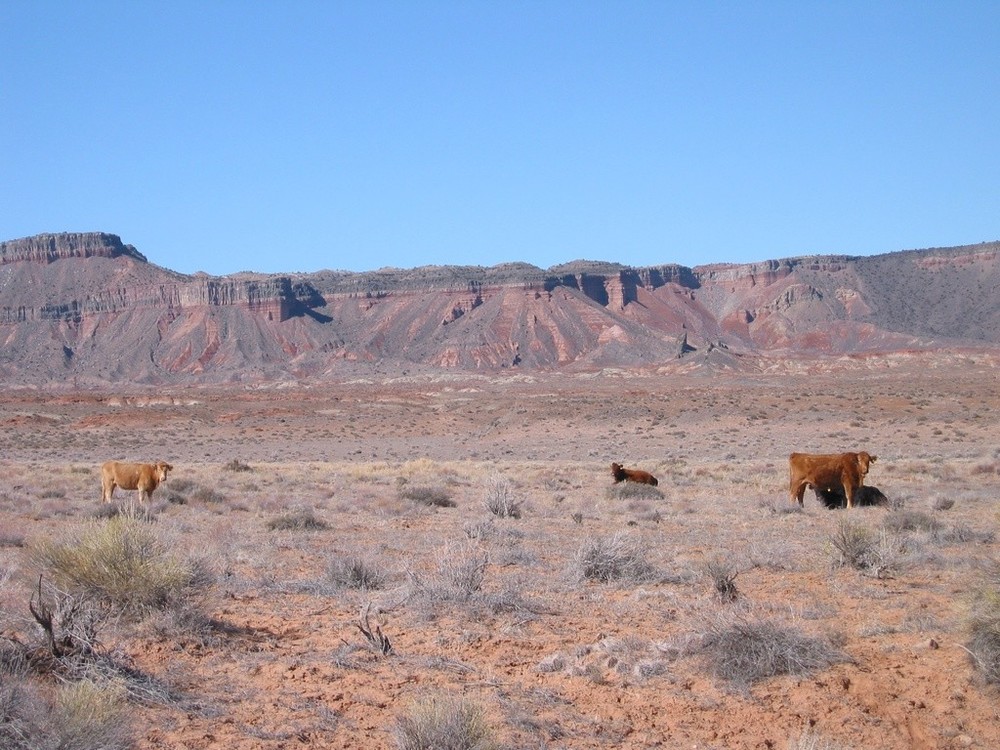 Cows wander about over the desert in the winter, in the background is Black Mountain. 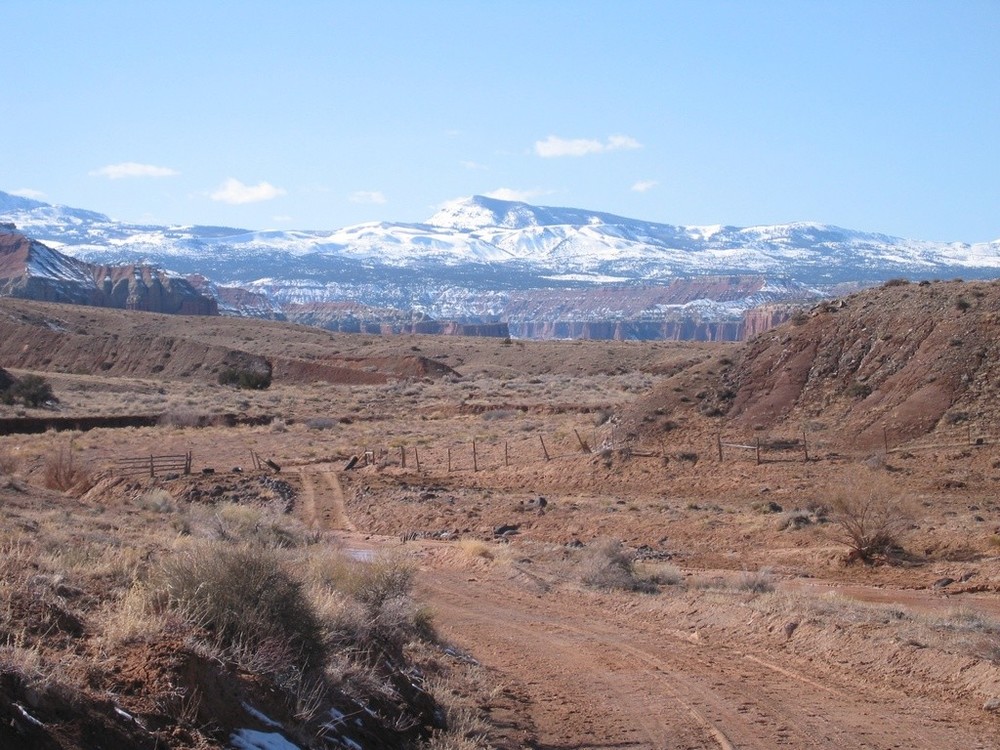 Entering the park again, the cliffs in the distance are some of the cathedrals. 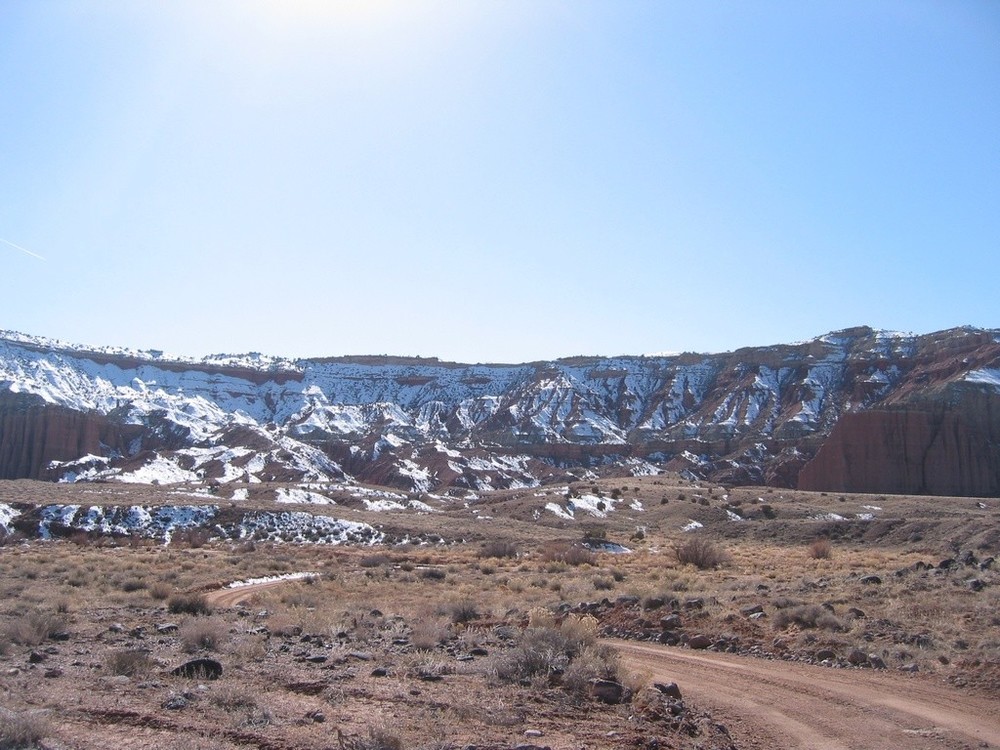 Snow right down to the valley floor. 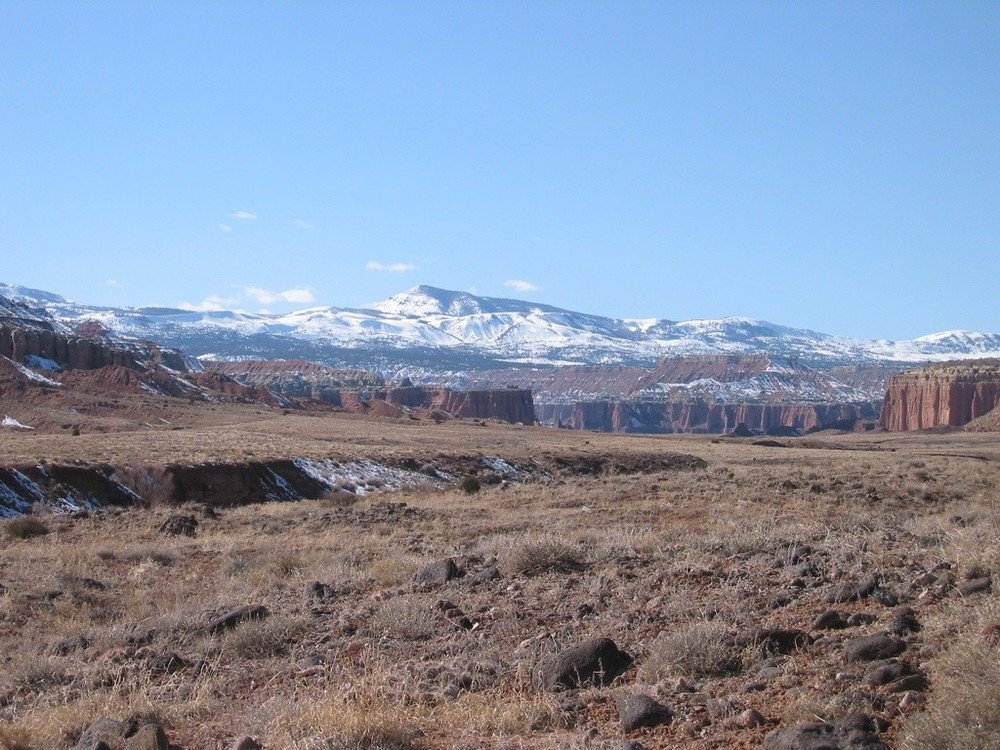 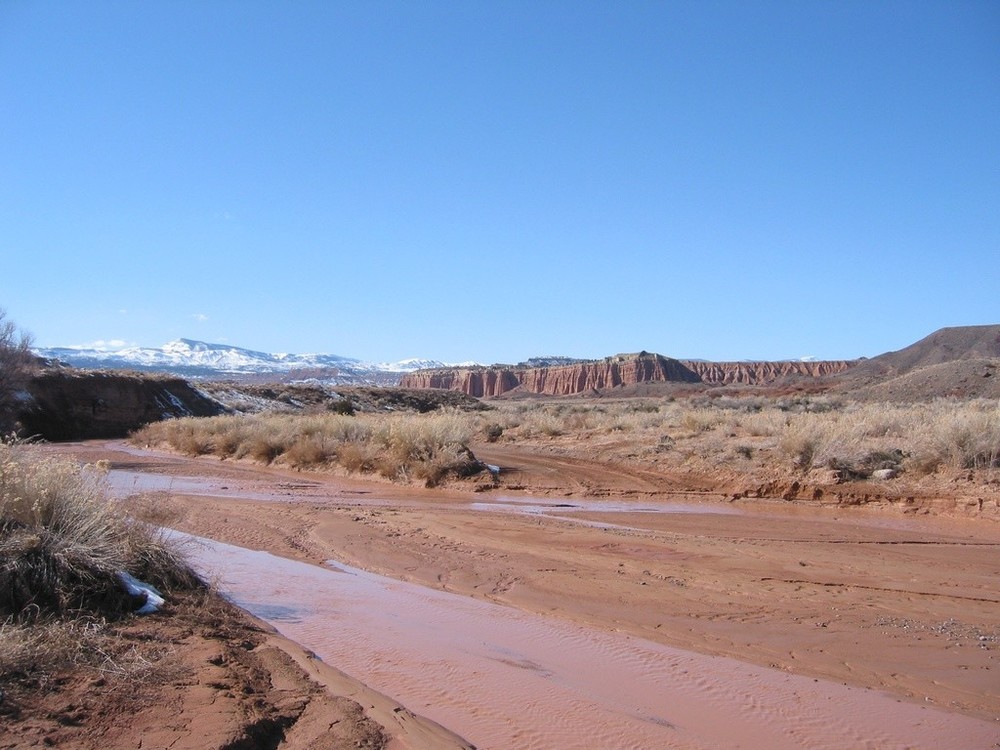 There were probably 20 wash crossings, some flat like this one, others with small drop offs up to about 12 inches. 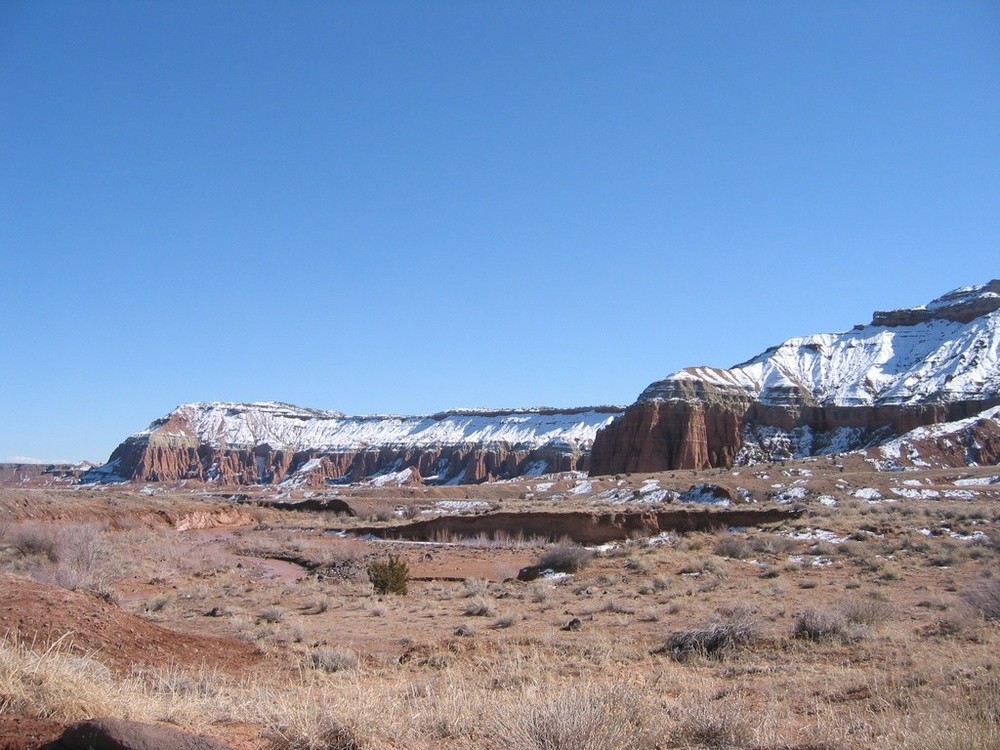 The rocks form large ridges extending out a mile or so from the mountains. You see that dark bank in the foreground, it had a little secret... 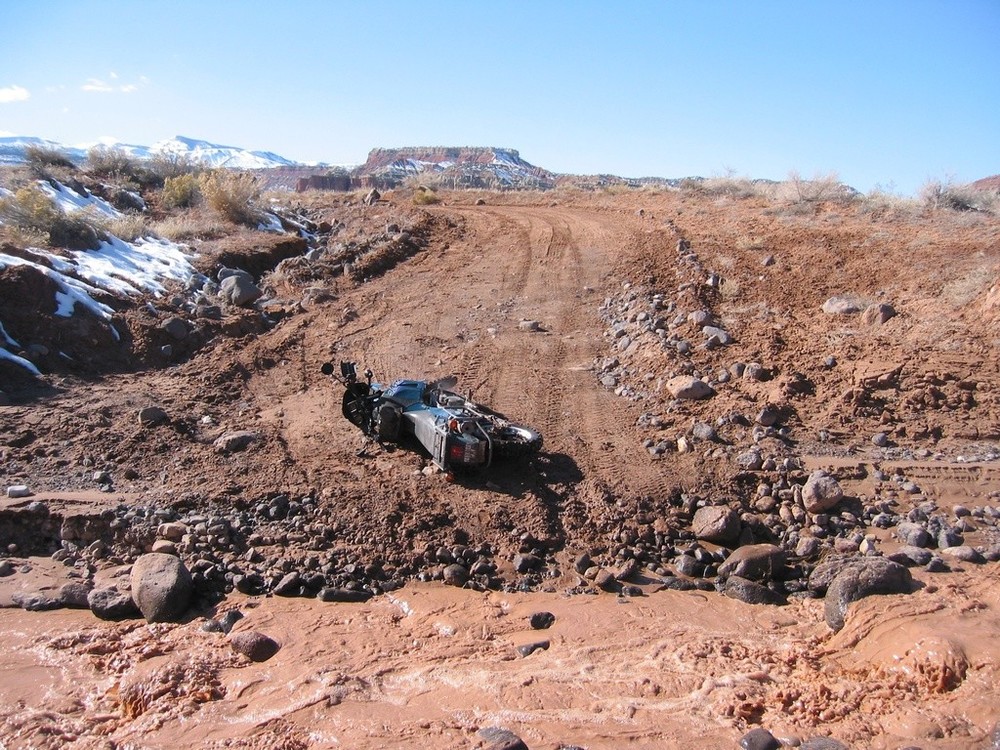 The stream is right at the bottom of the picture, easy to overlook in the picture as it is the same colour as the earth. I entered on the right side from this view but there was a giant hole in the middle which threw me almost off the bike, I gassed it hard which left me hanging from the bars and as soon as the bike had jumped out of the water dragging me along we fell over. No harm done, I fell into the hole again walking back to get the picture - I'm a slow learner sometimes. The bad thing was I knew I had to come back this way as the road doesn't go through in the winter, however, on the way back I scouted the left side of the crossing which didn't have a hole and I made it across without any problem. 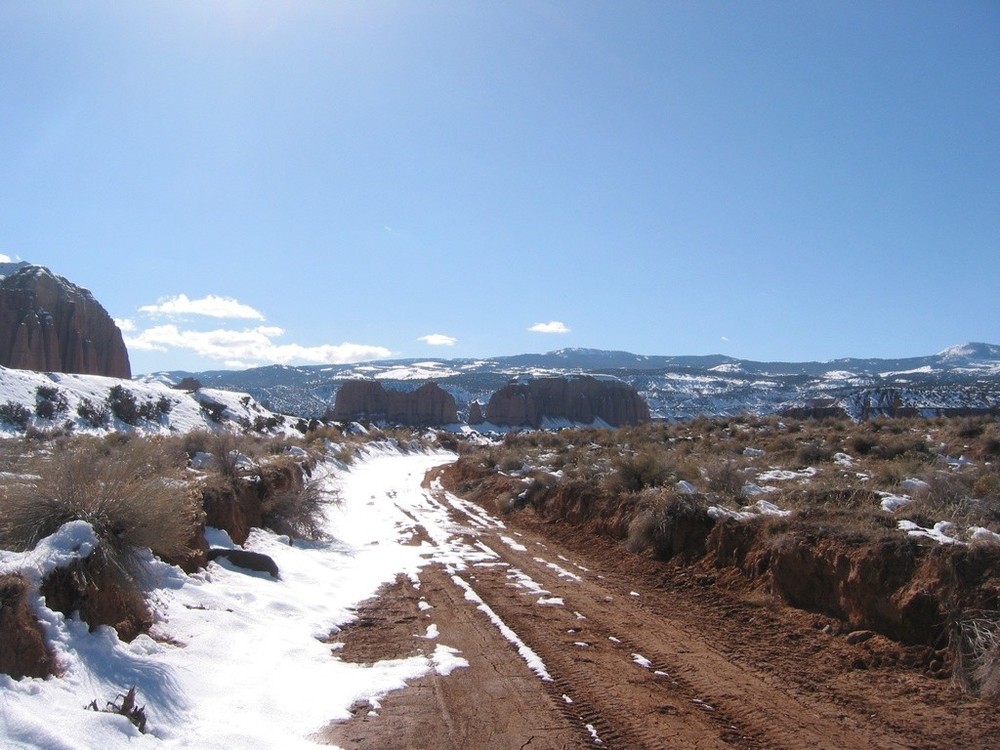 From here the road goes deep into the valley then climbs a cliff to the very top of Thousand Lake Mountain. I always knew I wouldn't be going much further and planned on exploring the unknown (to me) road out to I70. I stopped here not just because of the snow but because the mud was getting very wet. 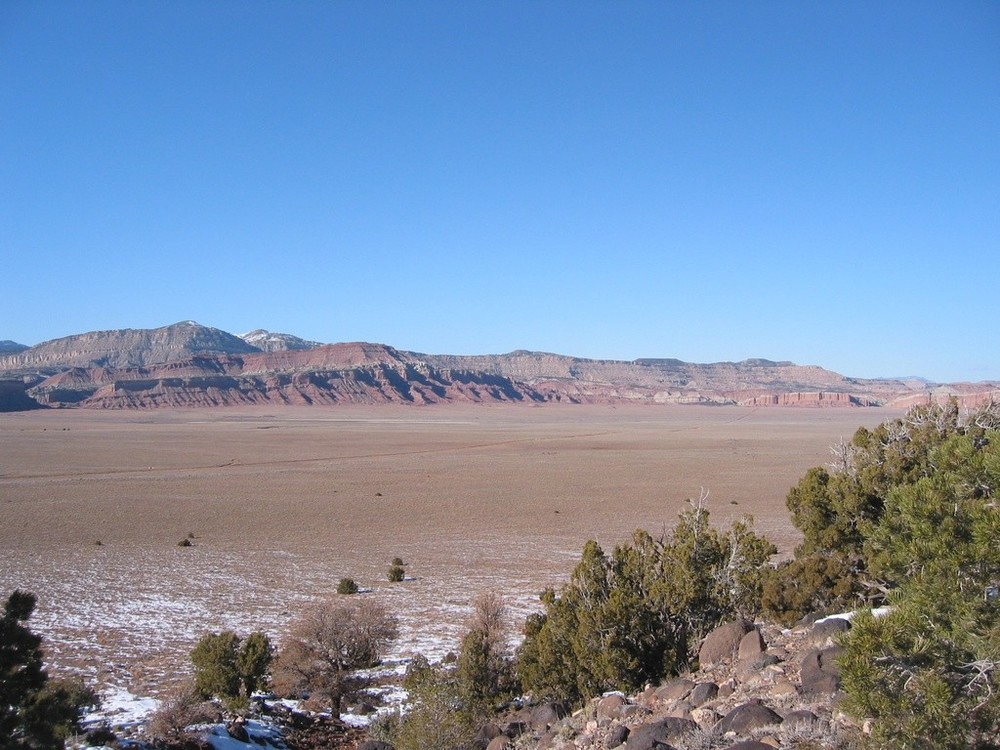 I climbed a steep hill several hundred feet to a large plain. 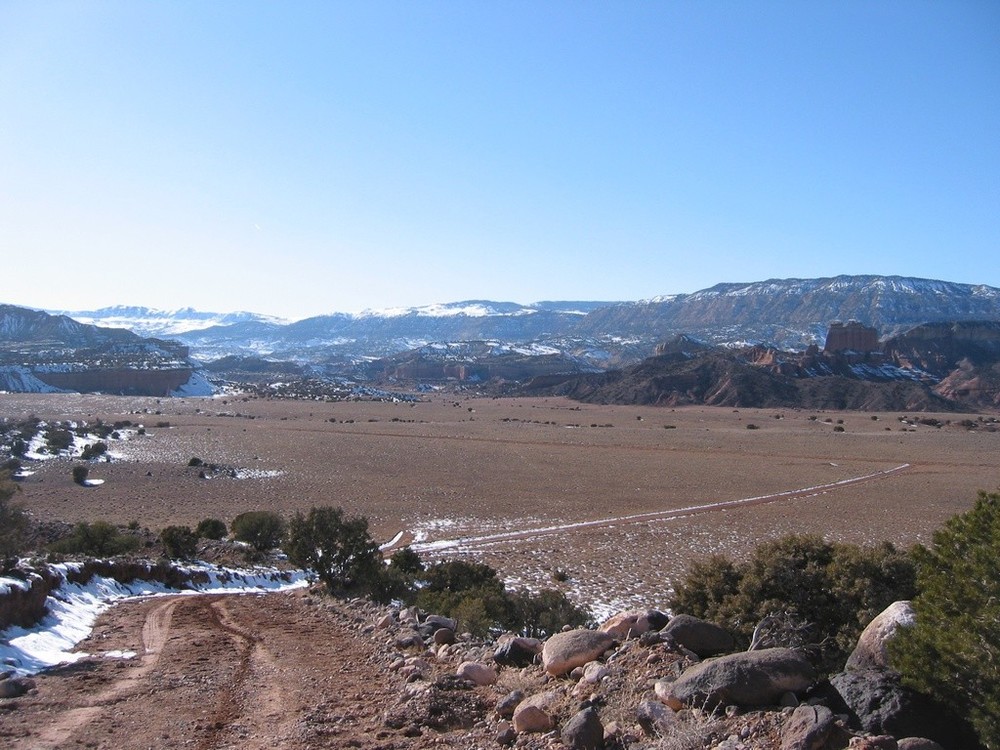 Cathedral Valley is off to the left now, the road runs right through the middle of the plain, this side road rises up a small hill and heads off to the east, it will need to be explored one day.

The road across the plain. I don't have a good map of this area so I don't know if the plain has a name.

I followed the road into the cliffs at the far end. 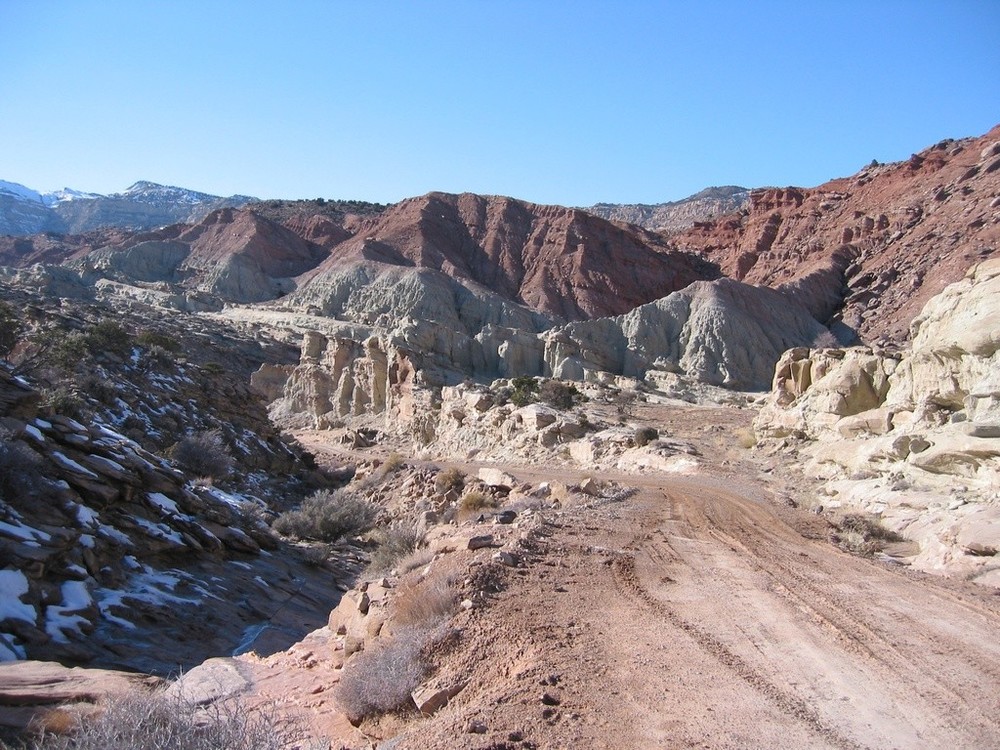 The road climbed up a little canyon or dugway as they call them here. 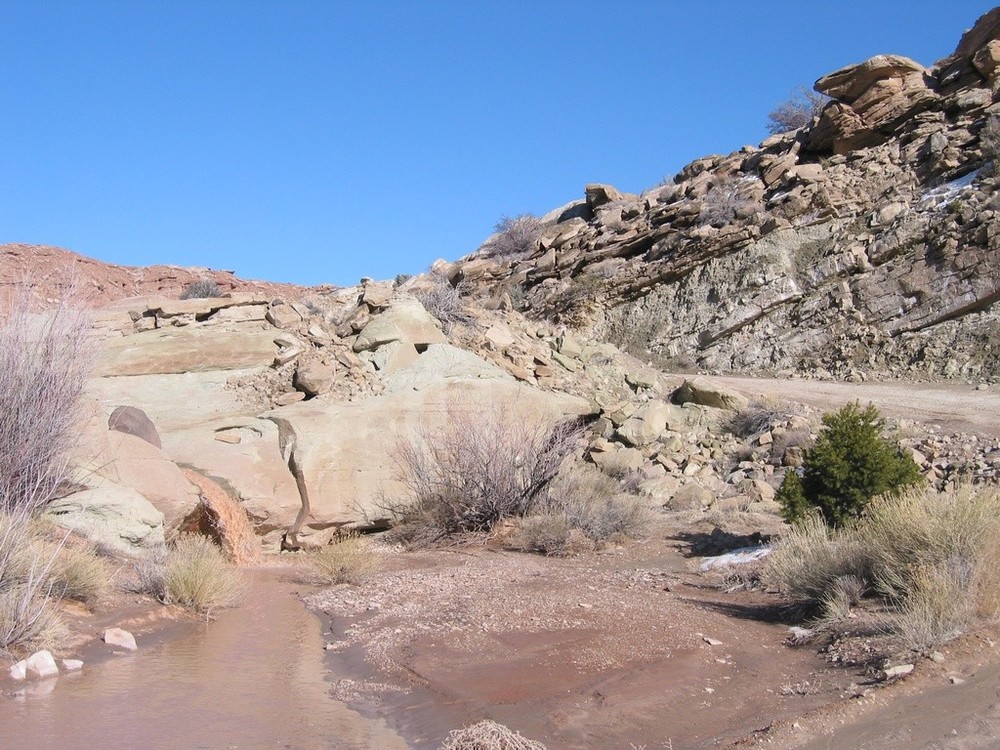 Nice little muddy waterfall on the left side. 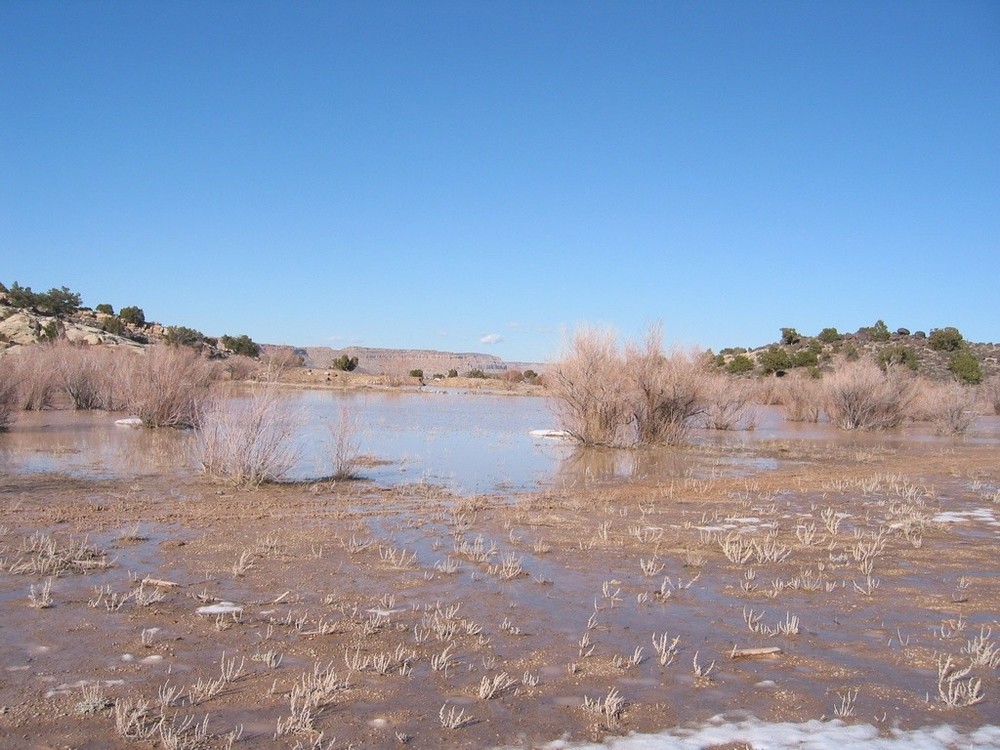 This was the scene at the top, this little lake drained through the road, the mud was thick and nasty (the road is to the right of the picture not through the water) However, just round the next corner while I was trying to ride on the dry edge of the road I got sideways and then was launched into the deepest part of the mud, there was no way out. I had passed a couple of guys riding horses and could see their truck and trailer up the road a hundred yards, they stopped to talk to me and said they would pull me out if I couldn't get free. I did actually get out of the rut but was no better off only managing to go a few feet before stalling the motor again, mud had packed up under both wheels stopping them from turning. Eventually the riders came back and pushed me until I got going but they told me that much of the remaining 10 miles to the freeway was exactly the same, which led to... 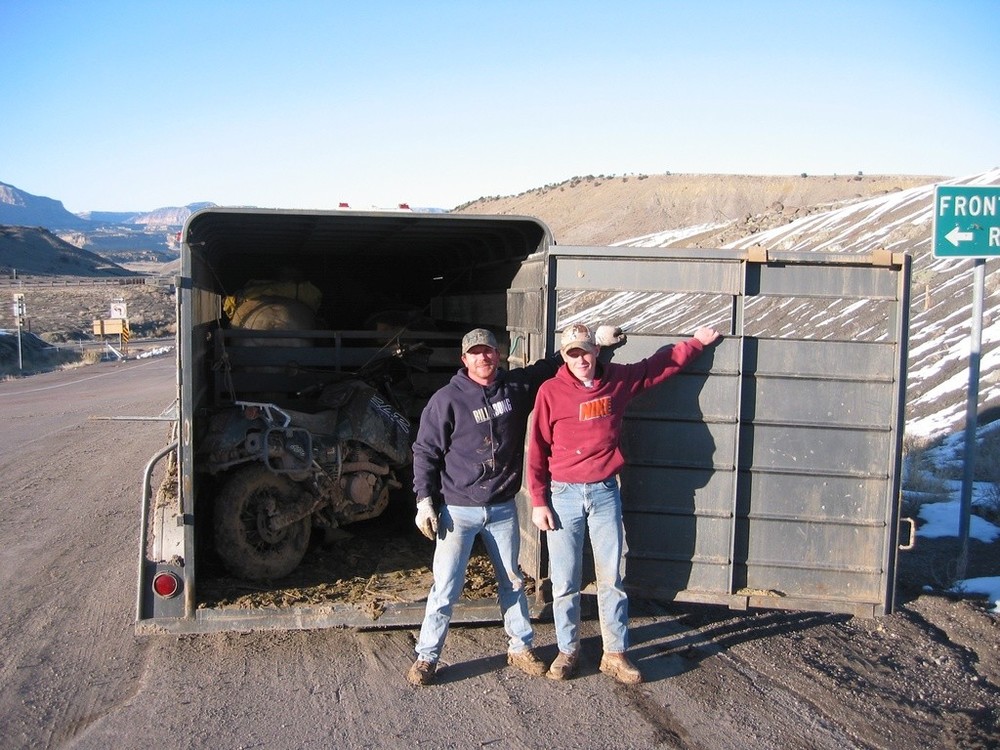 The Shame, the shame!
A running motorcycle in a horse trailer, how embarrassing. The clutch did feel decidedly worn and only engaged right at the end of its play and it was getting late in the day, that's my excuse...
As it turned out the road to I70 had dried out quite a bit since they came over it in the morning, the downhill from the lake was pretty horrible with the trailer pushing the truck all over the road next to a cliff. I had visions of that picture of a truck hanging over a cliff held up by a boat on a trailer. Anyway, thanks a lot to Bo and his father who's name I'm sorry to say I didn't catch, we did have some trouble understanding each others accents. I promised to buy them a burger next time they came into Torrey (as of April 2007 I haven't seen them again, nor as of 2019). 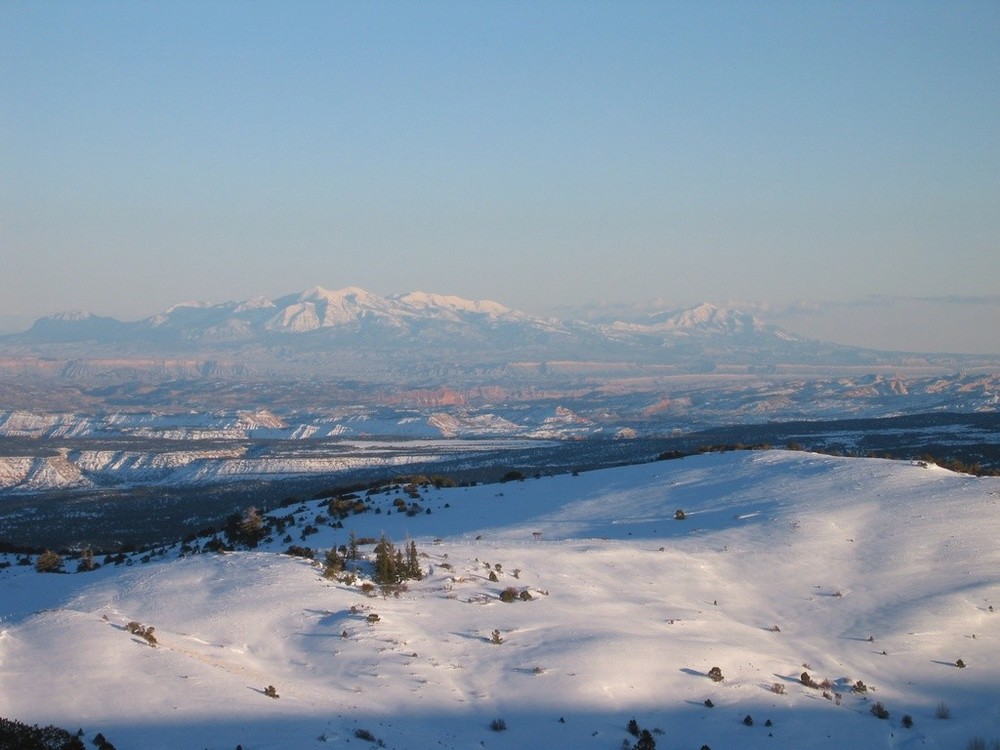 The ride back to Torrey was over UT 72 which goes up to around 10,000ft, the inside of my helmet was soaked with sweat from trying to get the bike out of the mud making it even colder than last week's ice face incident. 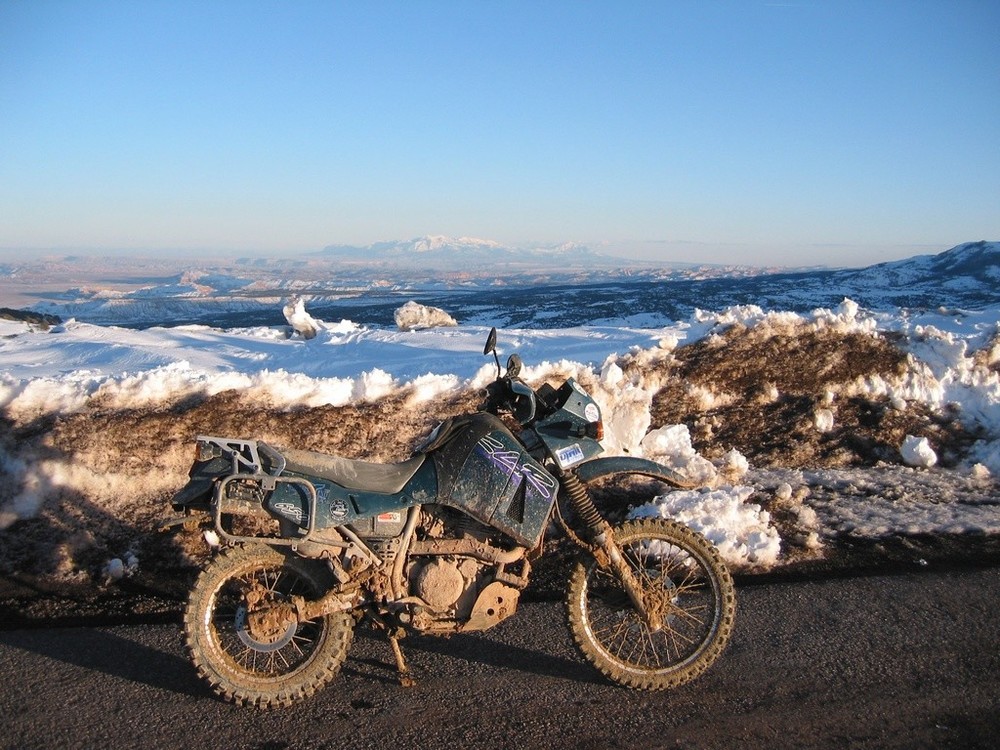 In addition to being clogged with mud the tyres had a layer of horse manure on them, you know how the dirt flies off the wheel and up in the air in front of you?, well - it did. I was a right mess and had to keep my mouth tightly shut. The worst of the mud is off by the time I reached the summit of UT 72, when I loaded into the trailer almost none of the spokes or rim were visible. Once I got home I tried to wash some of the mud off but it didn't wash off at all, it just got sticky and had to be scraped off. Where it had dried it was like baked bricks, Bo said it is called Blue Slate mud, it's the same as Bentonite. The clutch doesn't feel good, I may be replacing it soon.

The unnamed plain I now know is the North Desert.
The last picture of the KLR was taken at what we now call Mt Gleno.

It's been 5 years or so since I last rode a motorcycle and longer than that since I 'really' rode. After 138,000 miles the 1150RT disintegrated into parts in Eddd's garage and now sustains a multitude of other bikes around the country. Before this new format for BMWSportTouring appeared I hadn't even visited let alone posted on the board for a couple of years, all this is part of a bigger personal issue that I don't intend to discuss here (perhaps "Why Do I Exist", perhaps not, depends on the beer supply). I told Whip and a few other people that I needed to find a new outlet for my interests and to an extent I've done that with the American Discovery Trail, a cross country hiking trail that I'm now the VP of Public Relations for, as well as the webmaster. But that's a pretty low level of personal interaction, it's hard to walk to the next few states to meet people! I don't think I'll ever go motorcycle touring again but I would like to ride again and I do miss some of the people on the board. I still feel kind of sad about motorcycling, the loss of Gleno and Signman and a couple of non BMW people hit me hard, it's not that I'm afraid I might die riding, after almost half a million miles I'm over that, it's just something about the association of the activity with the loss of friends. Anyway, enough of that...

I live in Torrey, Utah, deposited there as a result of the twice annual BMWST weekends. Many years ago I had a blog called The Torrey Tales and a while ago Whip asked me if it still existed, I still have the domain and I still have all the posts, though in an inconvenient format. Given the availability of this forum and my liking for trying new things online I thought I might start a blog here, expanded from just The Torrey Tales but including them too. I've ridden quite a lot in my life in many countries, to the Arctic Ocean at Inuvik and almost to the Antarctic at Ushuaia, Argentina, as well all over the USA and parts of Europe. At one time riding motorcycles was all I did, here's the story.

Please feel free to make comments or ask questions or relate your own story, the internet IS my social interaction! I wrote this entry in Earp, California.

Because of the way blogs work any entry that pre-dates this one is considered a 'previous entry', so you have to look backwards to see most of my entries. Down at the bottom somewhere there is a link to 'previous entries" - it's a bit confusing. You can also click on the blog title, in this case Killer's Moto Life to see a list of entries.